An account from our Trustee Sam Cole talking about her inspirational fight to achieve Digital Display and Audible Announcement at bus stops across West Dorset. 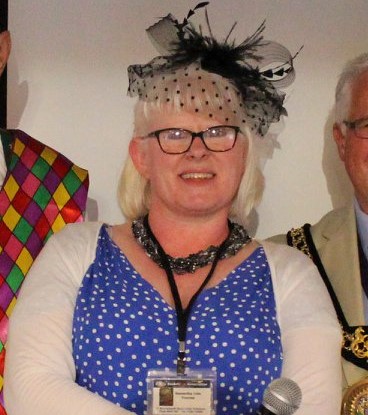 “It is so lovely to meet up with other groups in the county.  Our Social Eyes Weymouth meet roughly once a year with our equally young at heart mates in Poole and Bournemouth.   It is a fun social event, we exchange personal experiences, our coping strategies and so, so much more. One of the members Chris is up to date with apps,  I am good at law and entitlement, some people have great ideas how to fund-raise, some people want to get a mini break with like minded people, or a new friend who is “ in the same boat”. At one of these get togethers a couple of years back, I learned that in Bournemouth & Poole our colleagues had lovely grey key fobs for the digital bus displays. I asked about these and learned that their local council provide people with poor vision a key fob, which when pressed and pointed at the new digital bus displays will speak out loud exactly what it says on the visual display.  Well – I was astounded. I was astonished. In the whole of West Dorset, we have never been told about them, ever knew they even existed. This made me question, why? Why do West Dorset not have these? Why are our displays audio functions switched off?

I first called Dorset Blind Association and they informed me that they did not know why this was the case, but when last they tried to find out they were told that the Council did not provide key fobs for audible announcement.   So, I asked Dorset Blind Association to type a letter with my name on to ask Dorset County Council why we cannot access the audio described bus timetables, unfortunately Dorset Blind were unable to provide assistance with this particular issue. So I did some research and I rang Guide Dogs UK whom told me that it is breaking the law to not provide the service. I then called RNIB who were able to provide a basic letter with part of the accessibility law printed within, to show the West Dorset Council why they had to provide the audio information by law,  as presently they were breaking the law of the Accessibility Act 2010. So I used this letter and I collected twenty names and addresses of people at Social Eyes Weymouth to prove at least twenty people wanted this just in Weymouth. I had to chat carefully and politely at length over several months negotiating the case with the Transport Team. It was tiring and frustrating, so eventually I also called two Weymouth Councillors to get involved.

After months of sheer persistence – we got there.  An engineer has been down to Weymouth & Portland with equipment to gradually switch our units back on.

What a big difference this service will make for elderly or visually impaired in this area. The new service allows people to take their key fob to a bus stop which has a digital display. Then all they need to do is press the two buttons simultaneously to switch on,  press one button to hear the name of the bus stop and present time and the other button to hear the next bus that is due, and other bus numbers and times. I love it. I have never been able to access the information before which usually meant myself and guide dog could be sat in a bus stop up to half hour. So this service is extremely useful.’’

Well done to Sam for achieving this amazing service in West Dorset that can be used by our members and elderly or visually impaired citizens of West Dorset.

If you want to use this service in your area, please call Dorset Community Transport Information Line, to speak to Amanda Evans on (01305) 224518 as you may be entitled to this service.