One of our members Tom Archer has recently achieved a GOLD medal in a water skiing competition! He gives us an account of his journey and how he got to win the gold:

“‘Over the recent bank holiday weekend, I entered what was only my second water skiing competition. I entered the same competition last year, despite the fact that it was my first competition last year I was entered as an intermediate. Unfortunately I didn’t perform to my best and I made quite a big mistake… Falling in. However I still came away with a bronze medal.

This year, despite the fact that the weather was horrible on the day, I managed to perform to my best and made no major mistakes. It was fun and I felt so good about my performance that I couldn’t help but give a little punch in the air as I came in at the end of my set. I was so pleased and excited when they announced me the winner of the intermediate category and presented me with a gold medal. I was then surprised and elated when they awarded me with a trophy for outstanding achievement because they had noticed a vast improvement from last year. 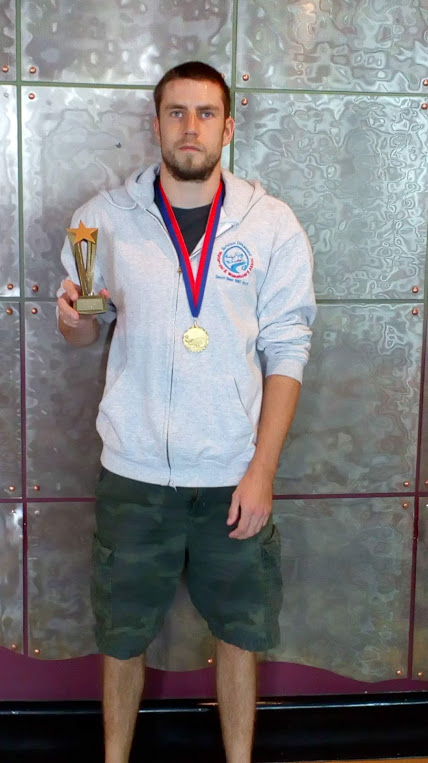 It all started in 2016, having tried out water skiing with the British disabled Water ski and Wake board Association at Ellingham Lake a couple of times, I decided to take it seriously. When I first tried I took to it like a duck to water. With the help of the instructors I managed to stand up my first time and I made it round the lake for two laps without falling in. Throughout the 2016 season in order for me to progress the instructors began to give me a little less help and encourage me instead of just staying behind the boat to play around and to cross the wake. They didn’t push me too hard as they also wanted me just to have fun.

Then begins the difficult 2017 season, I made it my goal to Ski (Waterski) without the help of the instructors. Obviously they would still give me instructions from the boat, either using a whistle or a helmet that is connected to a walkie talkie. However, I found this incredibly difficult and I think I spend more time in the water then on the water. I found this very frustrating and hope that no one noticed, but I think that my tantrums gave it away. But then on the 5th of October, which would have been my final session of this season, I finally managed it. I started the session off skiing along side an instructor, but it wasn’t going very well and for some reason I kept falling in. It suddenly occurred to me that I had nothing to lose so might as well try a solo start, as the boat pulled away I held on and stood up successfully. I received a massive cheer from everyone on the boat and couldn’t help but punch the air. Luckily, I stayed on my feet whilst holding on with one hand. As the BDWWA only hire the facilities at Ellingham lake twice a month, they encouraged me to join the Ellingham waterski and Wake board club. Meaning that I had another session to add on before the end of the season and since the start of this year’s season, which began in a very chilly March I have been skiing at least once a week.

From this point the next progression is that instead of skiing on a pair of skis, to ski on a mono ski. This is a lot more maneuverable and allows the participant to ski around the bouy on the slalom course. I then had to balance my time between perfecting the art of skiing on a pair of skis in order to win the competition this year and try to progress onto a monoski. Again this has been very difficult and I won’t lie has caused me to throw all of my toys out of the pram on a regular basis. As soon as I finished the competition this year I made it my target to be skiing on a monoski before the end of this season (October). Bolstered on by my performance and success, on the 1st of September I finally managed to independently start on a monoski and complete one lap of the lake and I was even able to play around with crossing the wake.  Now the world is my oyster!

None of this would have been possible if it weren’t for the brilliance of the British disabled Waterski and Wake board Association (Southwest), they cater for all kinds of disabilities and it is for everyone whether they just want to have fun or if they are like me and are super competitive and everyone in between. Of course without the Dorset Blind Association I may never have discovered this. I would encourage anyone to check it out, even if you don’t actually want to have a go.”

We are so pleased for Tom and wish to congratulate him on all of his fantastic achievements!